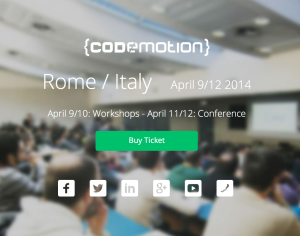 #pragma mark is officially a media partner of Codemotion Rome 2014. The event will be held in Rome at the Department of Engineering in Roma Tre from 9 to 12 April. To all members of our community there is a 40% discount on the ticket price which adds to early bird ticket discount.

Codemotion will consist of 16 thematic tracks dedicated to developers and enterprise: among other topics, during the conference will be addressed talks about Mobile, Web, BigData, Cloud, User Experience and Objective-C. In regard of coding languages, both functional and object-oriented, Codemotion attendees would have the opportunity to discuss about new languages, such as Dart or Hack, libraries like Backbone.js or frameworks such as Angular.JS, the new framework that have already captured the code scene.

Codemotion is scheduled in two days of workshops and two conferences, there will about 100 talks, 75% of which will be delivered in English.

Learn from the guru with the 6 workshops scheduled on Arduino, Responsive Web Apps Development with HTML5, Angular JS, JavaScript and Backbone.js, NoSQL and TDD!

The Early Bird expires on April 2, go for it!